You are here: Home / About Us / Our Team

dehulme@att.net
David has worked at Party People for over 20 years. He resides in Milford with his family. He is a past president of the Rotary Club of Milford, serves on the Milford YMCA Board of Directors, is President of Milford Pop Warner, was a member of the Zoning Board of Appeals and is part of the Milford Celebrates Committee.  He attended Dickinson College and enjoys his Redskins, Dodgers and Lakers.

tppiscott@verizon.net
Scott has been with Party People since May of 2001 as Business Manager. Graduate of Dickinson College and Gannon University. Married to Deborah and have a daughter Olivia.  Hobbies include playing sax in After Hours Big Band and the Tremont Community Band and motorcycling when my wife lets me. Still a Penn State football fan and root for the Minersville (PA) Battlin’ Miners.  I hate filing.

tppijim@verizon.net
Jim joined David in 1991 and together incorporated Party People in 1993. A graduate of Dickinson College, Jim currently manages the Pennsylvania office for Party People and resides in Pottsville, PA with his wife Lisa and the two youngest of six children. In addition to his duties at Party People, Jim has served in various Regional and National positions for the National Association for Campus Activities (NACA). He has also been a presenter on various educational session topics in multiple professional associations. In addition to that, Jim has served two terms as an elected board member for his local school district, where he served as Treasurer and chaired the Finance committee.

An avid sports fan, Jim is a “homer” rooting for the likes of all things PA – Phillies, Eagles, Flyers, and Sixers, as well as Penn State University, and all Blue Mountain (School District) teams as well as the Reading Rage Soccer Club teams. He invites telephone calls and enjoys “meeting” people daily. In Jim’s words, “the best part about this job has to be the people I have met, the life-long friendships I have made, and the things that I learn every day from an incredible group of young students and staff in the world of Higher Education”. But be forewarned, you’ll need more than a minute or two to have a conversation with Jim! 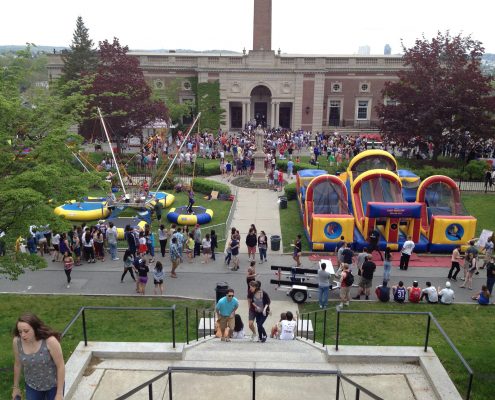